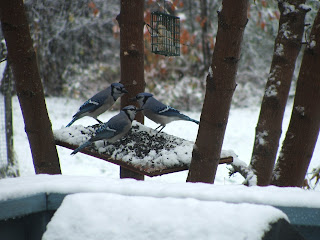 This past spring my parakeet 'Petey' died after living with me for 14 years. He was a beautiful blue and I've had him since he was 2 months old. When the weather started to get cooler I thought about all the birds that don't have someone to care for them and decided to start feeding the birds. I've considered starting in the past, but something always stopped me. So I bought a couple of inexpensive feeders and placed a nice flat board on the tree beside my deck, filled them with bird feed and waited for them to show up.

The website I had gone to for guidance said it could take up to a week for the birds to find the new feeder. They found mine in about 4 hours. I attribute that to the fact that my next door neighbor, who used to feed the birds, had moved over the summer. 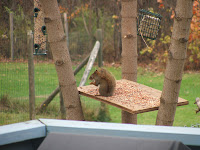 When the weather started to get colder again the birds started hunting for a their old feeders and found them, just in a different spot.

Early on I even had a couple of hummingbirds looking for food, but I didn't get a feeder for them because I knew they wouldn't be sticking around for the winter. The Chickadees were the first to really flock to the feeder, followed by Nuthatches and little black and white woodpeckers and even a couple of Cardinals. Then it was discovered by an industrious little red squirrel who also found a warm place to live under the hot tub and has moved right in for the winter. Not that I blame him. The bluejays discovered me and have decided that they liked my feeder so I'll have anywhere from two to ten bluejays at a time surrounding the feeder. But when the gray squirrels come they clean me out. Luckily I have a couple of dogs to discourage them. 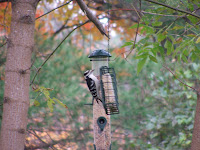 The feeder creates an interesting drama all of it's own. My toy poodle has taken up the charge to guard against gray squirrel invasions and given the chance chases them off with enthusiastic barks as he bounds across the lawn. Those gray squirrels run every time, despite the fence that he can't get through surrounding the bird feeder. The really funny part is that the red squirrel refuses to be chased away from his food. He simply climbs the tree and hides, the dog never the wiser. If I needed more proof that he considers this his kitchen, I got it today when I observed him chasing the bluejays off. 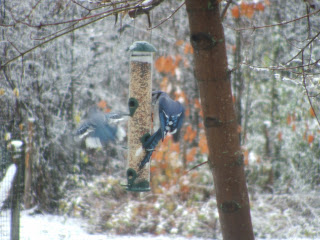 The bluejays perch all around on the tree and take turns coming down to the feeder, sometimes two or three at a time. This morning I watched with some amusement as the red squirrel chased the bluejays off their respective branches. They didn't go far but it was funny to see his frustration as he tried to discourage them. It almost looked like a game of tag.
Bluejays are not easily discouraged.

After some observation I think the best squirrel deterrent, for gray squirrels as the red seems to know the dog can't get him, is to leave the husky dog outside sleeping on the deck. They observe from a tree away but won't come any closer until he's been inside for a while. It is discouraging to come home after work and find the feeders on the ground with little chew marks around the openings and seed gone completely.

Feeding the birds has quickly turned into a passion. All the pictures on this post are from my bird feeder. We've had one freak snowstorm so far but the weather has turned very cold and more snow is on it's way. I know that while it might not be hard to find food right now, that will change when the snow comes. It's an inexpensive way to help the small birds and animals in my area and has given me some satisfaction to see their enjoyment. I think Petey would approve.
Email ThisBlogThis!Share to TwitterShare to FacebookShare to Pinterest
Newer Post Older Post Home