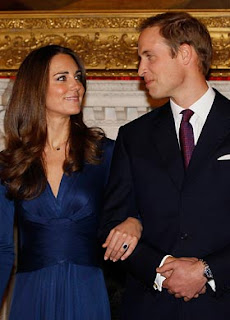 I have to admit that the story of Prince William and Kate Middleton is one that has my imagination stirring. I mean really, how often do you see a true royal romance? It's obvious from the way they look at each other and their easy manner together that they are truly in love and ready for marriage.

A sweet touch was using his mother's engagement ring to propose. I loved how Kate chose a dress for the formal announcement that complemented the ring. She obviously knows how much it meant to William. She may not have royal blood, but she has class and dignity. She will make a beautiful and dignified wife for William. In a way by making her part of the family William is honoring his mother's wishes by choosing a woman who is not royal. I'm sure Princess Diana wouldn't have wanted him to choose a woman simply because of who her family was. He chose a woman he loves, and has taken the time to have a lasting relationship with before taking the leap of marriage. It's hard not to admire that. He claims to have hopefully learned from the mistakes of his parents and so far it looks like he has. Princess Diana would be so proud.
Email ThisBlogThis!Share to TwitterShare to FacebookShare to Pinterest
Newer Post Older Post Home