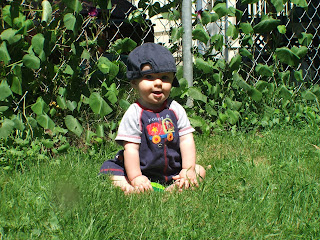 Ain't he cute? He's the reason I've been so distracted all summer. I'd forgotten how much work a baby can be.  Between the swimming lessons and birthday party trips for my four year old and dealing with the stress of the baby not sleeping it's been a lot of craziness so far this year. I'm still not sure what's going to happen next in my life.Thankfully that is no longer the case with my book.

I've been working hard to finish Unexpected Destinies and plan to submit it to Avon around October 1st. They have a new eBook line, but the best part is that you can also order the book in print so all those people who didn't have a device to read Past Destinies will be able to get Unexpected Destinies.

I'd been having a hard time deciding how to do the ending with in the best way. I couldn't decide if the villain should be killed by the hero, himself, someone else or just get carted off to jail. But then I thought about how I'd dealt with the villain in Past Destinies and he wasn't even as evil as this guy, so I thought I'd better find a good way to kill him off. Sorry guys, I'm not keeping him around for the next book. It has its own villain already, it doesn't need another one. I think I've found a good way to do it, but I'm not sure if I want to draw it out for long. I hate those books where you think the bad guy bought the farm and then he's in the next chapter trying to kill the hero again! I know I'm writing about magic and soul mates and a god and goddess but let's try to keep some reality in this.

The work doesn't end there though! Once I've submitted Unexpected Destinies I get to go back to work on the next book in the Destinies Series, Forbidden Destinies. It's another contemporary but has a lot of twists to it that I'm hoping my readers will appreciate. Some of the characters are really fun to write - I couldn't resist starting on it already. I've tried to stick to the self made rule, 'Don't start on another book before you've finished with the current work in progress' but it's not always easy. In fact I'm beginning to wonder if it is possible to write more than one book at a time.

My husband has been away for the past 6 weeks in Germany. He works for the government in a civilian capacity and visits a lot of military bases for extended periods. He'll be heading for Japan in another 6 weeks for another 6 weeks but will be home just in time for Christmas. We miss him terribly when he's away but it's always an adjustment period when he returns because I've been the lone adult for so long. It's nice to have someone around who appreciates my cooking though. And this morning he made breakfast! What a guy.

My daughter started preschool this year and managed to nail her first audition and was selected as a bee for a professional production of the "Nutcracker". She wants to be on the stage so bad, and every time I bring her to her dance class she wants to know if this is the week they'll go on stage. I told her she needs to keep practicing, it's not an automatic thing. I have a feeling that this is not the only stage she'll be on.
Email ThisBlogThis!Share to TwitterShare to FacebookShare to Pinterest
Newer Post Older Post Home