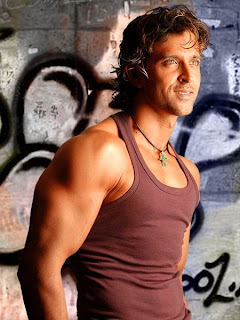 Today my hunky inspiration is the very handsome and talented Hrithrik Roshan, one of Bollywoods top male actors. I've been watching him for about eight years now and he is an impressive actor, playing everything from an action star to a mentally challenged boy. The only complaint I've ever had about his movies was that they weren't in English - well that has changed with the release of his new movie, Kites. It was filmed in both Bollywood style and Hollywood style - meaning one version is in Hindi and the other in English! Also the Hindi version will have more singing and dancing, typical of Bollywood films. That's probably why I love them so. And Hrithrik can DANCE!!

Aside from doing what he does, he has been an inspiration to me as a romance writer in depicting smokey scenes between my story lovers. When I'm not sure how to describe the male role I think of Hrithrik or watch one of his movies and I get inspired! I hope he inspires you too! Just because I think it's cool and I can't wait to see it, I've included the trailer for Kites here. Enjoy!