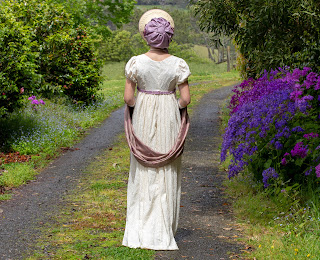 It has long been realized that a woman of good fortune must not look below her station to marry.

But what about love? Love should never factor into it as love can fade, but good family connections with the right people do not.

Persuasion has always been my favorite Jane Austin book. Probabaly because there is something about Anne that reminds me of myself. How easily influenced I was in my youth to do things that were not always in my best interest and lived to regret them.

If you don't already know the story, Persuasion is about Anne Elliot who turned down a proposal from the man she loved when she was seventeen because he did not come from money. She didn't want to turn him down, but was persuaded by her late mother's best friend to do so for her 'best interest'. The book opens with Anne, now 27, still unmarried and absolutely miserable. She puts on a good show for her friends and family, who never suspect how lonely she is. She misses her Captain terribly, and while has had decent proposals from others could not bring herself to marry them.

Now Captain Wentworth, whom when he was courting her was considered to be so ineligible, has made his fortune and returned in search of a bride. But will that be Anne?

There is something terribly romantic about a second chance at love with someone who your heart never quite forgot. I think that's why I've always loved this story. And while I felt Netflix's version told the story in a more updated way, for me at least, it lost none of the underlying heartache and sadness that is at the core of Anne's character.

There has been a lot of outrage on the part of the Jane Austin purists because this version does not strickly follow the book and Anne talks directly to the camera. But in my opinion it makes the story easier to understand. In the original version, there were certain elements of the story that confused me when I first read it. The romance was always easy enough to determine, but the other moving parts of the book with the other characters at times confused me. Mostly because of how society worked and at times the way the book and several movie versions played out made it difficult to follow unless you were well versed in the culture of the time.

This version lays out things in a manner easy to understand and follow. Sure, it's updated to make it more relatable, but it loses nothing from the story itself, and in my opinion adds quite a lot to it.

If you haven't already had a chance to watch it, I highly recommend you do. Laugh and cry with Anne as she gets the chance to win back the man whose heart she broke when she was influenced to give him up. It is currently on Netflix.