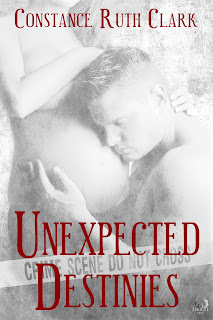 It's Out! Released Day was September 3rd. I had a lot of fun writing this book, and introducing a new character to the series, Cupid. He's discovered Agatha is bringing together soul mates and considers her an interloper  so he starts behaving as anyone who feels threatened would. He starts sabotaging her matches.

Unexpected Destinies is special to me because I used my own experiences of a supposed best friend betrayal in high school. So in a weird way Jayne is kind of like me. She's stubborn and thick headed when it comes to seeing what is right in front of her, but she's put up walls because she had to find a way to protect her broken heart. When Nick comes back into her life she's determined he won't hurt her again and at a small hint that he might, she shuts him down. It doesn't take long to discover she can't shut down her heart forever.

Nick isn't perfect either. He made a huge mistake when they were dating in high school and allowed himself to be manipulated by the wrong person. Now that he's seen Jayne again he doesn't want to let her go again, but she makes it damn difficult to get close this time around. When she finally does open up it almost blows up in his face again, but fate gives him a second chance to make it right.

I'm hoping there are a few twists and surprises that will keep you interested in reading more. Please enjoy my book, Unexpected Destinies and let me know how you liked it!