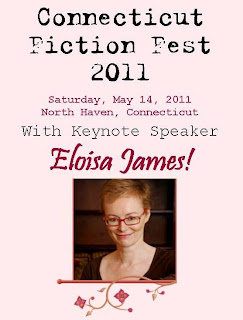 This past weekend, as planned, I attended the Connecticut Fiction Fest 2011.  It was fabulous! I had the very great pleasure of meeting one of my all time favorite authors, Eloisa James and getting one of her newest releases in my 'goodie' bag! She was sweet enough to sign it for me. I'm officially star struck . . . . . .

While there, I also had the pleasure of promoting my book, Past Destinies, and trying to sell the next. I was lucky enough to recieve 3 requests for Unexpected Destinies from both editors and agents and even a request for my Paranormal YA series that I'd put on the back burner while working on the Destinies series! While excited about that request, I'm also nervous because it needs some work. I think the ideas are solid and really awesome, but now to get it all on paper. I've decided to work on the requests for the Destinies Series first. I had one agent request everything in the series!

It was the first time I've been away from my three month old son since his birth, and I think it was harder on me than him! Since I'm breastfeeding, I still woke up at 4am ready to feed, but instead of going back to sleep while he quietly nursed, I had to get up and pump for an hour. Of course I also had to do that twice more during the day. I think that was the hardest part.

This weekend I'm planning to attend the Maine RWA Writing Conference featuring Hannah Howell. She's another one of my favorite authors, whom I was fortunate enough to meet last year.I'm looking forward to seeing everyone there, since I haven't attended a meeting in months due to complications with my pregnancy and now having an infant. I hope everything goes well. 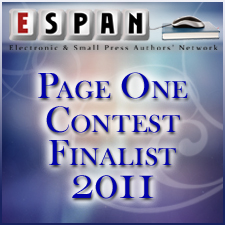 Also, just wanted to make a small annoucement about my placing in the Page One contest I was encouraged to enter with ESPAN. Here's my little badge to show that I placed in the top 5! Winners will be announced at the National RWA conference in New York City. I wish I could make it there, but alas, funds will only stretch so far.
If you'd like to read the entries (mine is #34) you can find them at ESPAN-RWA.com. There are some terrific finalists! Congratulations to everyone who qualified!!

Now please excuse me while I go write. With any luck you'll be reading my next book by next year!
Email ThisBlogThis!Share to TwitterShare to FacebookShare to Pinterest
Newer Post Older Post Home